I had a strange phone call from a former member of Bethany this morning. She wanted to know whether something she was considering doing was against the teachings of our Church.

That's what was most strange about this conversation. This long lost member hadn't been to church here (or anywhere else, presumably) for almost a decade. And yet she was worried about doing something that might be contrary to what Lutherans teach.

What Lutherans teach is Law and Gospel. What Lutherans preach is Christ crucified. We do, of course teach ethics or righteous works done for the good of one's neighbor. But those are not the core of who we are and what we believe. Those are at the periphery. And if you miss the center, it's pointless to dabble in the peripherals.

What's the core? The Divine Service.

On Sunday mornings, when God gathers His people together, He gives the gifts that we cannot live without. He gives sinners forgiveness that transforms them into saints. He gives dead people life. He gives people who cannot do anything good apart from His intervention the full righteousness of Jesus.

This former member is not alone in her thinking. Lots of people think this way. How many times have you thought about someone, “Sure he doesn't go to church, but at least he's not into really bad sins like others are.” “Sure my kids don't go to church, but at least they don't (do drugs/shack up without marriage/hit their wives/get too drunk too often/end up in the police blotter).”

That's not Christianity. That's not Lutheran. That's works righteousness. The point of the Church is not to keep you from sinning. The point of the Church is to deliver forgiveness. If you don't go to church where God gives us forgiveness, life, and salvation, no amount of avoiding “big” sins can help you. It's not sin that damns us. Jesus died for all sins. It's unbelief that damns. And rejecting God's gifts in the Divine Service by skipping church is unbelief. Telling God “no” is unbelief.


At the end of this odd phone conversation, I didn't care what she chose to do with her moral quandary. All I wanted was for her to be receiving the gifts of God again.
Posted by Hemmer at 11:04 AM 8 comments:

Beaten Before We Started

As I write this, news is breaking that the Supreme Court has struck down the Defense of Marriage Act as unconstitutional.  So it goes.  It was bound to happen.  The redefinition of marriage has been going on for decades, and the Church has allowed it to happen.  Only recently, when the definition has been slightly expanded to include two people of the same gender, has the church raised her voice in protest.  And then only weakly.

Marriage has already been redefined.  As God created marriage, it was a life-long union between a man and a woman, as the liturgy of Holy Matrimony teaches, “intended by God for the mutual companionship, help, and support that each person ought to receive from the other…so that man and woman may find delight in one another…for the procreation of children who are to be brought up in the fear and instruction of the Lord.”

Did you catch that?  We used to believe that marriage was about more than just love.  It was about the life-long companionship of a man and a woman, that they might have a God-pleasing outlet for their sexual desires, that God might bless their union with children.

If you believe that marriage is simply about love, then children are optional and divorce is a good solution if you quit loving each other. 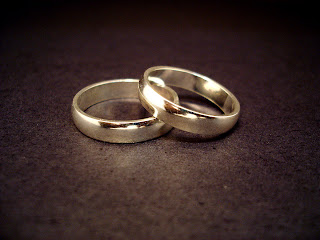 As long as the church is unrepentant for allowing contraception and no-fault divorce, she has already allowed marriage to be redefined.  Advocates of same-sex marriage are just using the new definition of marriage that we have permitted: two people who love each other.

Before we gripe and moan about the SCOTUS’s opinion on DOMA, we would do well to turn critical eyes toward ourselves.  If we begin in repentance for our past (and present) mistakes, for wanting to receive some of God’s gifts but not all of them, we’ve found better ground to stand on.  Then we can extol the beautiful gift of marriage, which is more than just the relationship between a man and a woman.  It’s an icon of the relationship between Christ and His Bride, the Church.  This is the only perfect marriage, the only perfectly eternal marriage, the only perfectly fruitful marriage.

I left a message for someone in your group sales office that I'm reasonably certain will go unreturned. As I did last year, I called to speak to someone there regarding the coupons we receive every year from Six Flags that you ask us to hand out to our captive audience of school children and VBS-goers. What I was calling to find out was how many fliers for Bethany Lutheran Church to mail to you to hand out to visitors to your park on one day. I figure if you expect me to advertise for Six Flags, the least you can do is return the favor.

Believe me, I don't expect that to happen. But neither should you expect a congregation of the Lord's Church to be the instrument by which you do your marketing.

Maybe you've been duped by an entertainment-saturated culture into believing that the Church is just another place people go to get entertained, and so, “customers” of churches should be ripe customers for Six Flags. Maybe you've been tricked by the preachers who scratch where ears itch that the Church is little more than a social club of affluent (or wanna-be affluent) people who come to feel better about themselves so they can live better lives now. Maybe you blasphemously see the Church as a means to an end, whereby you can more easily disseminate admission coupons than by coughing up the cash for ads on Coca-Cola cans.

The Bride of the Lord Jesus, the Church is none of those things. Well, not exactly. She is a means to an end, but not where the end is greater revenue for Six Flags (or any of the bazillion companies who want us to try to sell their stuff to the people in our congregations). The end for which the Church exists is the saving of people, the forgiveness of sinners, the reconciling of humanity to God. As such, the Church is the place where God accomplishes these miraculous events.

Those are holy things.
And they're all gifts.

Imagine how it would cheapen this message and trivialize the gifts of God the Church exists to give out if we coupled the message of forgiveness abundant and free to an advertisement for reduced admission to an amusement park.

Do I have anything against Six Flags? No. In fact, if we find enough discount coupons from Coke cans, I might even bring my family there this summer.

But I'll let your amusement park remain a place for amusement and entertainment, and I ask you to let the Lord's Church be the place for forgiveness and salvation.

Stories like this make me a little misty-eyed. A little.
Posted by Hemmer at 8:08 AM No comments:

Back from the dead

The blog at least. Jesus, too, of course, but it's Holy Week; don't get ahead of yourself.
Holy week greetings from the "presiding bishop" of the Missouri Synod
Compare that to the Easter greetings from the presiding "bishop" of the Episcopal Church, Katherine Schiori.
One you can listen to uncritically, simply receiving the Word as it's proclaimed to you and for you. They both will cause you to give thanks to God for faithful, pastoral church leadership of the Missouri Synod.
Posted by Hemmer at 8:14 AM No comments:

Does the Lutheran Witness set the paradigm for all things Lutheran? If so, the December issue normalizes for Missouri Lutherans things classically Lutheran like saints, crucifixes, rich church architecture, first communion prior to Confirmation, a pastor's study, repentance, and maintaining the distinction between Advent and Christmas. Gee whiz. Really? Those things are Lutheran? Who knew.
If you don't subscribe, you should.
Posted by Hemmer at 6:15 PM 1 comment: 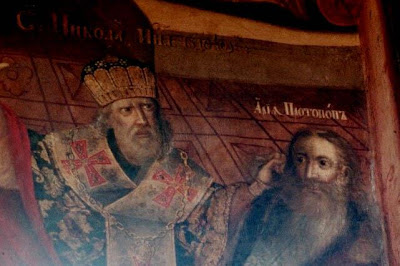 This is from last year's St. Nick's Day.
And this article from World Mag in 2005 has been bouncing around the Internet today. In it, Dr. Veith calls for incorporating the St. Nicholas slap into our Christmas traditions. I think that's a fantastic idea.

This will take a little tweaking of the mythology. Santa and his elves live at the North Pole where they compile a list of who is naughty, who is nice, and who is Nicean. On Christmas Eve, flying reindeer pull his sleigh full of gifts. And after he comes down the chimney, he will steal into the rooms of people dreaming of sugarplums who think they can do without Christ and slap them awake.

And we'll need new songs and TV specials ("Santa Claus Is Coming to Slap," "Deck the Apollinarian with Bats of Holly," "Frosty the Gnostic," "How the Arian Stole Christmas," "Rudolph the Red Knows Jesus").

Department store Santas should ask the children on their laps if they have been good, what they want for Christmas, and whether they understand the Two Natures of Christ. The Santas should also roam the shopping aisles, and if they hear any clerks wish their customers a mere "Happy Holiday," give them a slap.

This addition to his job description will keep Santa busy. Teachers who forbid the singing of religious Christmas carols—SLAP! Office managers who erect Holiday Trees—SLAP! Judges who outlaw manger displays—SLAP! People who give The Da Vinci Code as a Christmas present—SLAP! Ministers who cancel Sunday church services that fall on Christmas day—SLAP! SLAP!

Blogs worth the time to read